Psalm 1: Becoming a Tree of Life

If you missed the last blog post introducing the Book of Psalms, we made an observation that is going to help us as we embark on a journey through some specific psalms in the weeks to come, and that observation is this: The Psalms teach us how to live by teaching us how to pray. 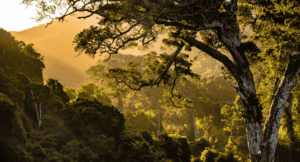 A recurring theme throughout the Bible is that humans are not meant to be self-determining creatures. As creatures, we have a Creator, and that Creator has designed us in such a way that we will only discover the purpose of our creatureliness in light of our Creator. Here’s another (less nerdy) way of putting that: You were made for a life of prayer. Talking to God is in your job description as an image bearer. Put another way, prayer is the conversation within which we discover who we are in light of whose we are. That’s why we pray, and that’s why we read the Psalms.

In conjunction with the summer series at Church on the Move called “Restoring Your Soul,” we will be releasing blog posts each week that hit on each psalm from a different angle. First up: Psalm 1.

THE PURPOSE AND PLACEMENT OF PSALM 1

In the last post, we explored how the Book of Psalms was meticulously arranged by Israelite scribes into five books, the first book being Psalm 1-41. This fivefold arrangement, however, was not the full extent of their scribal activity. In other words, they didn’t act like card dealers in Vegas shuffling the various psalms into five random piles. Each and every psalm was carefully arranged for a specific purpose, and Psalm 1 is no exception. Paying attention to this helps us read the entire book the way it was meant to be read.

Psalm 1 has often been called a “prologue” or “preface” to the Book of Psalms. Go ahead and read through it once or twice.

1 Blessed is the one

who does not walk in step with the wicked

or stand in the way that sinners take

or sit in the company of mockers,

2 but whose delight is in the law of the Lord,

and who meditates on his law day and night.

3 That person is like a tree planted by streams of water,

which yields its fruit in season

and whose leaf does not wither—

whatever they do prospers.

4 Not so the wicked!

that the wind blows away.

5 Therefore the wicked will not stand in the judgment,

nor sinners in the assembly of the righteous.

6 For the Lord watches over the way of the righteous,

but the way of the wicked leads to destruction.

Now do a quick comparison with Psalm 3 (NIV).

How many rise up against me!

2 Many are saying of me,

“God will not deliver him.”

3 But you, Lord, are a shield around me,

my glory, the One who lifts my head high.

and he answers me from his holy mountain.

I wake again, because the Lord sustains me.

6 I will not fear though tens of thousands

assail me on every side.

Deliver me, my God!

Strike all my enemies on the jaw;

break the teeth of the wicked.

8 From the Lord comes deliverance.

May your blessing be on your people.

What do you notice?

Whereas Psalm 3 contains first-person speech to God (“I call out… Deliver me, my God…”) Psalm 1 takes a different approach; there are no personal pronouns and no direct pleas to God. It’s more observational in nature, as if to say, “Here’s what’s possible if you live a life of prayer.” It gives us vivid imagery of what this life will look like.

The dominant metaphor (a figure of speech where one thing is symbolically used to refer to another) in this Psalm is the blessed human as a tree. Now, keeping in mind what we have already said about the meticulous arrangement of the Book of Psalms, do you think this choice of metaphor has any deeper significance? (10,000 points for getting the right answer here.)

Yes! Where have we seen trees before in the Bible? Think back to the setting of the beginning of the story in Genesis 1-3. A garden. Two trees. Two humans. And one choice: Which tree will you choose? Interesting. It almost sounds as if the author of this Psalm is linking his test (“Will you choose the path of the wicked or the way of the righteous?”) with the original test in the garden.

Thinking back again to Genesis 1-3, how were Adam and Eve expected to pass the test? Did God give them any resources or tools? Did they really have a chance at obeying? Well, if you count having a direct command from God instructing them not to eat from the tree of knowledge of good and evil as a “resource” (Gen. 2v16-17), then yes, they absolutely had the opportunity and ability to obey! This was, in fact, the first time God gives somebody his “Law.” The test in the garden is the first of many “tests” in Scripture (For more, watch BibleProject’s video on “The Test”). Each test invites an individual to consider two paths that are laid before them, one leading to life and the other leading to death. And in order to help guide humans in this journey, God gives us his Law.

A CLOSER LOOK AT THE “LAW OF THE LORD”

Out of all the words in the church that carry the most baggage, “Law” has to be at the top of the list (right up there with “flannelgraph”). You most likely had some sort of reaction when you read that word in the previous paragraph, probably a negative one. The elephant in the room when it comes to Psalm 1 is that we love the life it describes (“Leaves that don’t wither? Unceasing prosperity? Tell me where to sign up!”) while overlooking the God-ordained means that make such a life attainable.

The psalmist says that this life is realized through a “delight in the law of the LORD” (Ps. 1v2). “Law” is a perfectly good translation here, but it could also be translated as “instruction” or “teaching.” In Hebrew it’s the word torah. Another way to think of torah, in the broadest sense of the word, is as God’s revealed will.

Think about it this way. Just like parents establish and reveal a culture in their home through what they do and do not allow, when God gives commands, he is revealing his own culture—the Kingdom of God. And the commands that God gives, as shown time and again throughout Scripture, are good. His commands are for our flourishing, which is why the psalmist in Psalm 119 can say things like, “I will delight in your statutes” (v. 16), “Lead me in the path of your commandments, for I delight in it” (v. 35), and “Oh, how I love your law!” (v. 97).

If we look closely at the poetic context of Psalm 1, the “torah of the LORD” is the life-giving water that enables the tree to prosper. “That person is like a tree planted by streams of water” (Ps. 1v3). In other words, much like how a tree needs water to survive, the psalmist here is saying that the Law of God, or the torah, is equally vital and necessary for humans if we are to flourish. Each and every test in Scripture—as well as tests in our own lives—are opportunities to trust in the life-giving torah of God rather than ourselves.

WHO WILL PASS THE TEST?

Throughout the Old Testament, we see human after human fail to pass this test. Adam and Eve were but the first of many that trusted their own wisdom over God’s, that walked in “the counsel of the wicked,” “stood in the way of sinners,” and “sat in the seat of scoffers” (Ps. 1v1). We do, however, every once in a while, get a glimpse of what is possible when a human “delights in the torah of the LORD.”

David inaugurates the golden age of the Israelite Kingdom.

Esther saves her people from destruction.

And while all of these individuals are rightfully honored in Scripture, none of them are able to re-open the door to Eden that leads to the tree of life.

That is until a young carpenter from Nazareth announces to his disciples that he is the “true Vine” with “abundant life” on offer (John 10v10; 15v1-17). And these offers were subsequently validated when he passed his own test in a garden (Matt. 26v36-46).

You think Jesus knew what he was doing?

When you and I read Psalm 1 today, we can read it knowing that Jesus of Nazareth is the ultimate Tree of Life. More than any other person that has ever lived, he truly, genuinely, and fully delighted in the Law of his Father, only doing what he saw the Father doing (John 5v19). Because of his prayerful obedience, we now have the opportunity to “abide” in him, to plant ourselves not just next to streams of water but in Living Water himself (John 4v7-15).

When we do this, when we “keep his commandments” (John 15v10), when we “delight in the law of the LORD” (Ps. 1v2), when we pray, Jesus says we will become life-giving extensions of him that bear fruit in our communities.

Two paths are before us. Two trees. Two choices.

A life of prayer or a life without it.

Which will you choose?