Going Deeper: How to Understand the Book of Acts

Before we take a deeper look at the book of Acts, let me tell you a story.

In the late summer of 1993, I hopped in my 1990 champaign-colored Toyota Camry—the newest car anyone in our family had ever owned (equipped with a cd player and a cassette deck)—and drove more than 1000 miles from my rural hometown of Edison, Georgia (pop. ~1000) to the booming metropolis of Tulsa, Oklahoma (metro pop. ~1 million) for college. I wasn’t making this drive alone, though. My dad was with me. I was the first of my parent’s four kids to graduate high school and go off to college. 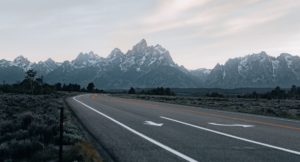 I could tell this move was as big of a deal for my parents as it was for me. They handled it with thoughtfulness, generosity, and (I’m sure) lots of prayer. All along the way, Dad and I shared memories, talked about where to stop for lunch, and discussed how to manage all my new freedoms this first semester of college.

One of Dad’s thoughtful touches was the gift of two books, each meant to help guide me into this unknown future without him. The first was a wide, tall, and relatively thin book stuck in the side panel of the passenger door, written by some guy named Rand McNally. Are you familiar with his work? It was a total 90’s dad move to make sure I was equipped with the essentials: a flat tire kit and the latest Rand McNally Road Atlas. Dad had given me the full-tilt version, with road maps of the entire United States of America.

…He mentioned with a look of envy at his gift. Let me just say, since this was back when mobile internet devices were merely a twinkle in Steve Jobs’ eye, I used the heavenly heavens out of that atlas over the next few years.

The other book couldn’t have been more different. While the road atlas was to become an everyday book subject to coffee spills and hamburger grease stains on its pages, this second book was notably more sacred. My dad had tucked it away from my view for most of the trip. At an appointed time, he instructed me to open the glove box, and there it was.

This book was chosen like someone chooses a thoughtful birthday card.

It contained a collection of stories written from the perspective of a father to a son, chock full of simple wisdom for making good decisions and processing the real challenges that lie ahead of a young man after leaving home.

Stuffed into the front of that book was a big, thick letter from Dad.

I read the letter and the book slowly and quietly.

Because of the long drive, I was able to reflect, talk about significant points, and take time to say thanks. Once I arrived on campus, I kept that book and its accompanying letter in a special place. The map bounced around in the back of the Camry.

Nowadays, as a pastor-theologian, I think about these two different books often as I read the Bible, and Acts specifically.

What sort of book is Acts?

Is it more like a roadmap, a personal letter, or a wisdom/storybook? The author’s intent matters to the reader’s understanding, doesn’t it?

If I searched my dad’s letter or the wisdom/storybook to guide me to Dallas, I might end up in Albuquerque. Conversely, when I needed to navigate which academic major to choose or what to do when my relationships seem to go off course, the Rand McNally Road Atlas could only show me the quickest routes to run away from it all.

The questions I would be asking of those books would not be aligned with the stories the authors were trying to tell.

In the same way, if we don’t understand the sort of book Acts is and the story its author is trying to tell, we will likely find ourselves lost and frustrated.

Acts is an ancient book written in a foreign language.

How can we know the author’s intent? Thankfully, on that long road trip from ~62 AD to 2021, not only has Acts been translated into a language we can understand, many sons and daughters have reflected on its meaning, and asked helpful questions along the way. We are not only the beneficiaries of two millennia of faithful preservation of the words of this book but also of the generations of resources from thoughtful scholars.

In other words, more has been written about Acts than you or I could read in a lifetime.

Yet, you don’t need any kind of academic degree or Masters Class to understand the book of Acts. The opening line of Acts tells us exactly what sort of book it is. Let’s look.

Acts 1v1-2 says, “In the first book, O Theophilus, I have dealt with all that Jesus began to do and teach, until the day when he was taken up, after he had given commands through the Holy Spirit to the apostles whom he had chosen.” Read full chapter.

What do you observe about the author’s intent in this opening line? Before you read my thoughts below, pause to consider your own. What sort of book is this?

Luke wants to jar us to action, making us feel like we’re jumping right into an already rapidly moving storyline. Like the fast-paced opening scenes to a Mission Impossible movie, we’re expected to quickly orient ourselves to what’s happening.

Yet, in one sense, this opening line actually is like a road atlas. On that 90’s road trip of mine, Rand McNally created that road atlas to let me see where I had come from, where I currently was, and how to get to where I wanted to go. In this opening line, Luke, the author of Acts is doing the same thing.

Throughout the history of the Church, faithful communities of Jesus followers have looked to the book of Acts to help them interpret their story in light of the capital “S” Story of redemptive history.

Much like an atlas, Acts has helped local churches navigate where to go in light of where they’ve been. We invite you to consider studying the book of Acts with this perspective in mind.

But clearly, the book of Acts is more than a kind of atlas, isn’t it? What else do you see the author doing? Let’s bring in one more reference.

Acts is a sequel.

The first work is the Gospel of Luke. I wonder if we can find anything to help us understand Acts by looking at how Luke started?

Luke 1v1-4 says, “Inasmuch as many have undertaken to compile a narrative of the things that have been accomplished among us, just as those who from the beginning were eyewitnesses and ministers of the word have delivered them to us, it seemed good to me also, having followed all things closely for some time past, to write an orderly account for you, most excellent Theophilus, that you may have certainty concerning the things you have been taught.” Read full chapter.

What do you observe, here? Look back at the text above. What did Luke say he was compiling? Why did he tell Theophilus he was writing this?

Luke-Acts is a narrative, a compiled story.

Luke wrote to one disciple of Jesus (for the benefit of every disciple of Jesus) to have wisdom (“certainty”) about how to live for Jesus. Now, do you see why I think of the books my dad gave me on that fateful college road trip? Acts is also a wisdom/storybook, with inspiring narrative and guiding wisdom principles throughout. And there’s even a little personal tucked into the front from the author.

Do you know what all three of those genres have in common—the road atlas, the letter, and the wisdom/storybook? They invite readers to put themselves in the middle of the story. In that way, Acts is also like the script for a play. You read it differently if you know you’re one of the characters than you do if you’re not.

The followers of Jesus took what Jesus began to do and teach and propelled it throughout the book of Acts, but in such a way that bids us come along and run with the story, empowered by that same Holy Spirit, ourselves. Understanding the book of Acts means diving into the story headlong, and anticipating Jesus’ wisdom and work to continue in and through you!

Will you join us? We’ll take it slow and give you time to reflect and ask questions.