Summertime. The days stretch out, long and lean, extending an invitation for us to soak up every ounce of sunlight left lingering on the edge of the horizon. There aren’t more than 24 hours in a day during the summer, but it sure does feel like it. More time for playing, swimming, laughing, eating, hiking, sun-tanning and sunburning.

Just a little bit longer.
The sun beckons us out of hiding and we happily respond to its call. 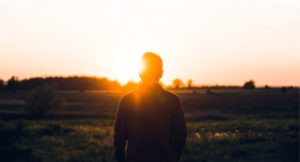 As the day wanes, gradually the grueling heat gives way to the more tolerable temperatures of the evening. One by one the stars begin to emerge, and maybe, if we’re lucky, a soft wind blows through the trees, and we begin to hear all the night songs of creatures we couldn’t hear in the busyness of the day.

Creation Has Something to Say

In the first six verses of Psalm 19 we read that creation speaks. There are no distinct words, but creation has a voice. This voice pours out speech during the day and reveals knowledge every night (v2).

“Their voice goes out through all the earth, and their words to the end of the world. In them He has set a tent for the sun, which comes out like a bridegroom leaving his chamber, and, like a strong man, runs its course with joy.” —Psalm 19:4-5

To put it bluntly, creation won’t shut up.

But what is creation saying?

“The heavens declare the glory of God, and the sky above proclaims His handiwork.” —Psalm 19:1

Just imagine, and rightfully so, the sun strutting across the sky declaring to glory of God. Day and night, the sun and stars—they all obey the One who created them.

This is all His handiwork.

All of creation testifies, “God did this!”

But that’s only the first six verses of this Psalm. When you get the verse 7 it feels like this Psalm takes a hard left turn.

Some think that because of the distinct language in the two halves of this Psalm that it may have at one time been two separate works. That may be so. But there is also something profound to consider if we look at the context of the Psalm in its entirety.

“The heavens declare the glory of God, and the sky above proclaims His handiwork.”

In verse one we are introduced to the idea that creation speaks of the Creator. It may not speak in any known language, but the voice of creation is heard.

“Let the words of my mouth and the meditation of my heart be acceptable in your sight, O LORD, my rock and my redeemer.”

This last verse is a request that the words spoken by the Psalmist would agree with creation, declaring the glory of God.

So, why the hard left turn in verse 7? It seems like the psalmist is telling us how to participate with creation in glorifying our Creator. Smart psalmist.

The descriptions of the law in verses 7-9 all have glorious outcomes for the one who heeds them.

How do we worship the God of creation? We delight in His instruction!

Creation speaks to us of the God who has given us His Word to follow and His instructions to obey. I’m a little bit nerdy so I made a chart. This is what verses 7-9 say about the law of the Lord.

Then in verse 10 he says that we should want the instruction of the Lord more than we want all the gold in the world. But he doesn’t stop there.

Turns out the laws of the Lord are sweeter than honey. And you might think this is hyperbole (an overstatement for effect) but it’s not! We were created to receive God’s instruction. We were created to live in intimate fellowship and communion with Him.

God’s Word testifies not only to who He is but to who we are and who we are becoming. And there is no greater testament to that reality than Jesus who not only delighted in the Law of the Lord, but He is also the Word made flesh.

“And the Word became flesh and dwelt among us, and we have seen his glory, glory as of the only Son from the Father, full of grace and truth…For from his fullness we have all received, grace upon grace.”

Jesus, the Word made flesh, is…

Sure, making wise the simple.

When we treasure Jesus, when we obey the commands of the Word made flesh, our lives become testimonies to the glory of God. Creation is glorious because it does what it was created to do. Its very existence testifies of the One who created it.