The Forgiveness of Jesus

Have you decided what you’re wearing this Easter?

Church on the Move has traditionally been a church that de-emphasizes Sunday morning fashion (seriously, come as you are), but when I think about Easter, I personally can’t help but think about clothes. 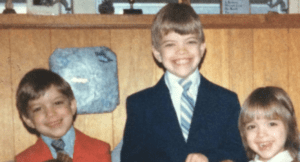 True confession: I loved dressing up for Easter as a kid. I mean look at 8-year old me with my siblings on Easter Sunday morning in 1983! I’m the sartorially inclined young man with a gold buttoned navy suit accented with a fat 70’s necktie — Dallas Cowboys colors, naturally. I was taught from a young age, “We always bring our best to worship Jesus on Sundays, but especially Resurrection Sunday!” Unlike most kids, I sincerely loved it. Don’t judge me.

The Bible seems to talk a lot about clothes. On page 2 of the Bible, we find out God placed humankind in a lush garden and made them His partners in blessing the world. Genesis 2v25 tells us Adam and Eve started out “naked and unashamed”. You might say they were clothed with innocence.

Of course, we know they didn’t stay this way. On page 3 of the Bible, we find out the enemy of God convinced Adam and Eve to trust their own idea of good and bad over God’s. And what was their first move after sinning against God and one another? A weak attempt to cover their own sin. They clothed themselves with shame (Genesis 3v7).

Would God curse them and leave them in their shame? Of course not! Genesis 3 tells us God chased them down, called them out of hiding, asked questions, elicited confession, cursed the ground and the serpent (not Adam and Eve), talked them through the coming consequences, and committed Himself to the solution (Genesis 3v15).

Then in a staggering act of goodness, God Himself clothed them.

Genesis 3v21 says, “And the LORD God made for Adam and for his wife garments of skins and clothed them.” The inference here is that the body and blood of an innocent animal were given to cover their sin. These biblical representatives of humanity were invited to take off their shame and put on forgiveness. Adam and Eve left the garden clothed with forgiveness. What kind of God would do this?

For millennia, humanity repeated the pattern of trusting the voice of God’s enemy instead of God’s voice, taking good and bad into their own hands, sinning against God and one another, clothing themselves in shame. Still, God was “merciful and gracious, slow to anger, abounding in steadfast love and faithfulness. Keeping steadfast love for thousands, forgiving iniquity and transgression and sin.” (Exodus 34v6-7)

Again and again, He offered to clothe His people in forgiveness and promised to do something about the problem of sin.

One day, He did just that. God showed up Himself as one of us. He laid aside His power and glory as God and put on humanity. Philippians 2 tells us how this worked. Jesus “emptied himself, by taking the form of a servant, being born in the likeness of men. And being found in human form, he humbled himself by becoming obedient to the point of death, even death on a cross.” (Philippians 2v7-8) John, Jesus’ closest disciple, said it this way, “And the Word became flesh and dwelt among us.” (John 1v14)

On the night before He went to the cross, Jesus shared an intimate last meal with His disciples. They broke bread, ate lamb, and drank wine. They quoted Scripture and sang together. But at one point the conversation took a turn. The disciples started arguing over which of them would be the greatest in Jesus’ kingdom. Can you imagine the scene? Jesus didn’t say a word. He simply got up from the floor-level table, walked to the other side of the room, and started taking off his clothes. I imagine the room got quiet as everyone wondered what Jesus was doing.

Jesus girded up His loins like a lowly servant, grabbed a basin of water, and started washing His disciples’ feet. Sopping wet, seamless robe on the floor, Jesus covered their sin with an act of goodness and said, “You want to be great? Treat one another like I have treated you.”

Less than 24 hours later Jesus was covered in His own blood, having taken the beating of a wretched criminal. He allowed Pilate the Roman prefect to clothe Him in shame — mocked with a crown of thorns and the robe of an earthly king.

Hours later Jesus’ seamless robe lay on the ground again. This time Roman soldiers gambled for its prize as Jesus hung naked and unashamed on the cross. 2 Corinthians 5v21 says, God did this for our sake, making Jesus “to be sin who knew no sin.”

Jesus hung naked on that cross, yet our sin, the shame of our sin was fully exposed as we, humankind, crucified our messiah. And what did Jesus say? He clothed us in forgiveness when He said, “Father, forgive them, for they do not know what they are doing.” (Luke 23v34) What a God!

What are you wearing this Easter?

The forgiveness of Jesus means someday we will stand before Him, nothing hidden, fully exposed — naked and unashamed.

On that day, Jesus will wipe away every tear from your eyes, “and death shall be no more, neither shall there be mourning, nor crying, nor pain anymore, for the former things have passed away.” (Revelation 21v4). And I have a hunch, when you’re dressed like that, your smile will be as big as mine was on Easter Sunday morning in 1983.