The Surprising Meaning of Disappointment

Disappointment isn’t always what it seems.

To You they cried out and were delivered;

In You they trusted and were not disappointed 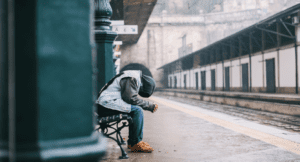 Dad was leaving. Again. Like many dads, mine often had to travel for work. Like many young kids, I was often disappointed when he did.

There was something different about this time, though. As memory serves, I clung to his ankle as he gently, patiently, playfully drug me across the living room. Finally, he escaped to his bedroom to finish packing.

“Why is dad leaving, Mom?” I asked, unable to conceal the swell of sadness.

“You know, honey. He has to go on another business trip,” she reminded me.

“Where?” I asked as if I knew the first thing about geography.

“Well… he’s actually going to California… to Disneyland,” she admitted.

“Disneyland?” I thought. The downward spiral of my despondency suddenly turned to wonder.

“CAN I GO TO DISNEYLAND?” I appealed with full-throated 5-year old audacity.

“Haha… well, you’ll have to ask your father,” she said, smiling at my mercurial mood swing.

To her surprise, I dropped to my knees, closed my eyes, and boldly prayed, “Heavenly Father, can I PLEASE go to Disneyland?”

This is a true story. I wish I could say it shaped the way I’ve thought about disappointment ever since. It hasn’t. That adolescent instinct to freely trust God with my disappointment faded with my adolescence. If only I could know now what I knew then. But this is just how life works, isn’t it? We grow up. Our innocence and naiveté are supposed to give way to street smarts, realistic expectations, thicker skin, and the like, right? Disappointment is unavoidable. Mitigating disappointment is part of adulthood. But is that the way it’s supposed to be?

Have you ever stopped to ask yourself the meaning of disappointment? Does it even have a purpose? Why is life so disappointing?

What if your disappointment is an opportunity for a divine appointment? Could it be that God really does want to meet us right at the place our expectations meet reality? If you’re currently in the middle of such a crossroads, this sounds trite. Offensive even. I invite you to keep reading.

Mary “The Magdalene” was from a grimy, little fishing town along the Sea of Galilee called Magdala. Galilean fishermen would store their big catches in Magdala so they could be dried and processed for export throughout the region. In that region was once a burial disrupted by Herod. Magdala carried the foul stigma of death and uncleanness. Just like today, places carried significance to personal identity. “I’m from Beverly Hills, California” carries a different identity than, “I’m from the slums of Calcutta”.  To be so “Magdala” that your friends call you “The Magdalene” meant something, too.

Unmarried in her twenties, untethered from an honorable family tree, Mary was likely born out of wedlock, living in Magdala, the region of the nameless and landless, she was already among the most outcast, most vulnerable in society. Jesus once passed through her little village but no encounter with Mary was recorded in the gospels. We do know she made the long, dangerous trek to see Him in Capernaum (Luke 8v2).

Biographer Bruce Chilton writes, “She probably came to him alone, on foot, over rock roads and rough paths, possessed by demons, her clothing in tatters… after Jesus had become known in Galilee as a rabbi who opened his arms to people considered sinful and did battle with the demons that afflicted them. If she had begun her journey from Magdala with a woolen cloak—coveted by travelers for shelter at night as well as covering in rain and cold—that and any leather sandals she wore might well have been stolen. Cloaks and sandals, however, were not within reach of every family: The poor had to make their way barefoot, warmed only by the thick flax of their tunics. We can only imagine the toughness of these Galilean peasants, by day outdoors, even in the cold winter rains and occasional snow of the region.”1 Many have associated Mary with great means, but the Gospel According to Luke simply does not say Mary shared the same status as Joana (wife of Herod). They are mentioned together in contrast!

Mary Magdalene had only ever known disappointment. That is until she encountered Jesus. We don’t have record of Mary’s exorcism(s), but scholars believe Jesus took as much as a year with her, taking his time with her, exorcising the seven demons. Many down through the years have misdiagnosed Mary’s problem as being sexual promiscuity. This was very likely not the case. Chilton writes, “In Mary Magdalene’s time and place—as in ours—victims of sin were often portrayed as being sinners themselves.” Whatever the case, Mary carried the weight of her disappointment to Jesus and Jesus not only accepted her, but He liberated her and radically changes her past to purpose.

Scholars believe Mary became the actual eye-witness source of Jesus’ exorcism stories we read in the Gospels. Further, Mary Magdalene went on to frame the ways in which the early church approached encounters with spiritual beings. “For that reason,” Chilton writes, “(Mary Magdalen) should be recognized as one of the principal shapers of Christianity’s wisdom as it concerns dealing with the world of spirits.”

Mary’s deep and significant disappointment truly became a divine appointment in the hands of Jesus. Scholar Frederick Dale Bruner submits, “After Jesus, Mary Magdalene seems to be the most faithful person in the Gospels — in all the final passion events she is always there. We should celebrate Magdalenic fidelity. In the records of all four Gospels, this one woman stands immovably by Jesus, even in and past his death. It is as if she will never ever leave him, even when he has had to leave her. She is there when he dies (Matthew 27v56), there when he is buried (27v61), and there now again at his graveside the first day of the week. Only she and the mysterious “other Mary” come Sunday morning.”

Still, faithful Mary, “The Magdalene” no longer carrying the stench of uncleanness, showed up at the tomb with the expensive smells and ointments Nicodemus had provided, to bathe, to prepare, to make clean the body of Jesus. Only to be disappointed again. What is disappointment but a missed appointment? She showed up. Jesus didn’t. Until He did.

“Now on the first day of the week Mary Magdalene came to the tomb early, while it was still dark, and saw that the stone had been taken away from the tomb… Mary stood weeping outside the tomb, and as she wept she stooped to look into the tomb. And she saw two angels in white, sitting where the body of Jesus had lain, one at the head and one at the feet.

They said to her, “Woman, why are you weeping?”

She said to them, “They have taken away my Lord, and I do not know where they have laid him.”

Having said this, she turned around and saw Jesus standing, but she did not know that it was Jesus.

Jesus said to her, “(Miss), why are you weeping? Whom are you seeking?”

Supposing him to be the gardener, she said to him,

“(Mister), if you have carried him away, tell me where you have laid him, and I will take him away.”

She turned and said to him in Aramaic, “Rabboni!” (which means Teacher).

Jesus said to her, “Do not cling to me, for I have not yet ascended to the Father; but go to my brothers and say to them, ‘I am ascending to my Father and your Father, to my God and your God.’”

Mary Magdalene went and announced to the disciples,

“I have seen the Lord”—and that he had said these things to her.”

Mary “The Magdalene” became the first person to testify of the risen Messiah! This story dares us to look at our disappointments differently. What is the meaning of disappointment? The meaning is our world is broken and from the depths of our being we cry out for someone to do something about it! From the smallness of our bruised egos to our deepest traumas, we cry out for justice! Save us!

There, standing in front of “The Magdalene” that disappointed woman from the land of disappointment, was Resurrected Hope Himself. Alive! Yes, you can go to “Disneyland”. The Kingdom of God is here! And yet not fully.

The meaning of your disappointment is this — God put longings in you that only resurrection can satisfy. Mary saw the resurrected King. And someday, so will we. Come Lord Jesus. Come quickly.