Success In Our Failure

In 1997, Nike released Failure, a dramatized ad many consider to be one of the most inspirational of all time. 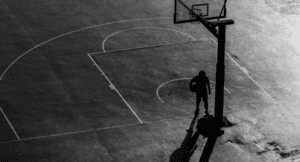 It was the year Michael Jordan began his famous last season with the Chicago Bulls en route to a 6th NBA title and second 3-peat, adding merit to claims that he would be known as the greatest basketball player of all time. The ad shows MJ presumably walking into the stadium before the game. In his own voice, Michael narrates:

“I’ve missed more than 9,000 shots in my career. I’ve lost almost 300 games. Twenty-six times I’ve been trusted to take the game-winning shot and missed. I’ve failed over and over and over again in my life. And that is why I succeed.”

What a picture of the triumph of the human spirit and the will to win, right? How motivational! Let’s go!

THE MEASURE OF SUCCESS

Just one little minor detail you forgot to mention in this beautiful failure-to-success narrative, though, Mike: You’re Michael Jordan.

Seriously. You were biologically, psychologically, and experientially predisposed to be the greatest of all time. Yes, you nurtured your gifts and worked through challenges, but your family of origin, your highly competitive temperament, your 6’6” frame and astounding 46” vertical leap—all made your athletic greatness imminent.

Said another way, I missed more than 9000 shots and more than 300 basketball games, and no one is talking about my basketball greatness. Truth be told, I was a decent basketball player, but no matter how much I wanted to be like Mike, it was never going to happen. If Michael Jordan was the measure of success for me, I failed.

Have you ever felt that way following Jesus? Like a failure? Like no matter how hard you try to be like Jesus you’ll never measure up?

Maybe you string together a few good decisions or have a run of good days, but then it happens. You pop off at someone in anger. You say that easy “yes” to the temptation you swore a forever “no” to. You took a shortcut at work or raised your voice at your spouse. You drank too much again, said too much again, ate too much again, spent too much again. And you feel like a failure.

You want to live like Jesus, be like Jesus, and do the kinds of things Jesus did, but when it comes down to it your wants are in conflict. Seems your other wants are winning.

Or maybe you’re at the stage in life where you’re not wrestling so much with sin as you are wrestling with God?

You go to church and even serve on a team, or you read your bible and even try to take notes… but it doesn’t seem to work. Or maybe you have the audacity to try hard things! Maybe you tried praying for the sick or talking to someone about Jesus and it didn’t go the way you thought it might. Do you feel like a failure, too? I know I feel that way sometimes. Is it possible to really become like Jesus?

PETER FAILED IN THE WORST WAY

Jesus had a disciple a lot like you and me, named Peter.

The whole point of being a disciple of a guy like Jesus was to become like Him and if any of the disciples had the potential to do it, it was Peter! He was courageous, enthusiastic, and responsive to Jesus’ promptings.

Yet time and again, Peter got it wrong. Peter tried to say the right thing and missed 9000 times and lost 300 debates, so to speak. No disciple tried as hard to be like Jesus and no disciple was more publicly rebuked by Jesus than Peter. Peter failed again and again and again. And that is why he succeeded. (Or, at least, that’s partly why).

Just before Jesus went to the cross, He told Peter he would fail in the worst way—he would deny him three times. Peter rebutted, “NO, JESUS! I WILL DIE WITH YOU, BUT I WILL NEVER DENY YOU!” (Matthew 26v35).

In the garden of Gethsemane, Peter (and his friends) failed to pray. Jesus did not fail, praying “Father, not my will, but yours be done.”

While Jesus was on trial, Peter denied Jesus three times. Jesus did not deny His kingdom, so Herod mocked Him, dressing him in kingly garments.

As Jesus was being crucified, Peter did not keep his promise to die with Him. Jesus kept His promise to the Father, stretching out His hands to be crucified for our sins and in our place.

But then something amazing happened to Peter after Jesus was raised from the dead. Rather than condemning Peter for his failure, Jesus promotes Peter! With a threefold “feed my sheep” renewal, Jesus was giving Peter His job as a good shepherd (John 10).

Then look at the specific words Jesus used in John 21v18-19:

“Truly, truly, I say to you, when you were young, you used to dress yourself and walk wherever you want, but when you are old, you will stretch out your hands, and another will dress you and carry you where you do not want to go.”

Did you catch that? This language was an echoed inversion of Jesus’ own journey to the cross!

Peter: “Another will dress you”

Jesus: “clothed him in a purple cloak and a crown of thorns”

Peter: “Go where you don’t want to go”

Jesus: “not my will but yours”

Peter: “Stretch out your hands”

Jesus stretched out His hands when “they crucified him”

SUCCESS IN OUR FAILURE

Jesus was saying, “Peter, bring me your failures! You really can become like me if you will follow me!” Church history tells us Peter’s death was, in fact, an inversion of Jesus’. As an old man, Peter was crucified upside down on a cross.

FAILURE IS NOT THE END OF OUR STORY

As followers of Jesus, we will fail again and again. But failure is not the end of our story. If we will take our failures to Him and follow Him, He can and will redeem them. You and I really can become like Jesus. And that is the very definition of success.